Writer and expert / Posted on

Discover all you need to know about Keratosis Pilaris; the causes, symptoms, and treatments…

There’s no denying that the appearance of Keratosis Pilaris – or KP as it’s more commonly referred to – is something that many people struggle to manage. But how do you spot KP, what causes it, and more importantly, how do you treat it?

What is Keratosis Pilaris?

Ever noticed the appearance of small, hard bumps on the backs of your arms? Or a weird rash that looks like goosebumps? Easily dismissed as pimples or hives, the appearance of these red bumps are caused by the skin condition, Keratosis Pilaris.

These irritating bumps can cause the skin to feel rough and dry, sometimes with redness or swelling, which is often why KP is known as ‘chicken skin.’ Bumps tend to appear on the backs of the arms, but can also show up on the thighs, bum and in some cases, even the face.

Despite a serious-sounding name, Keratosis Pilaris is completely harmless. Though understandably, sufferers often feel self-conscious and are bothered by the appearance of their skin. 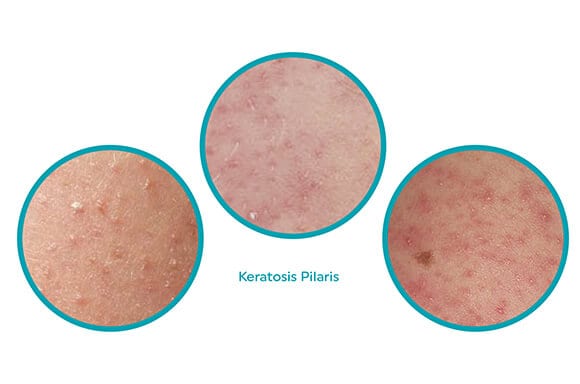 You’d be forgiven for assuming that the bumps caused by Keratosis Pilaris were spots or pimples, but unlike breakouts, they aren’t caused by a build-up of oil or bacteria, but a build-up of protein.

Keratin is a natural protein produced by our skin which helps to form a protective layer and strengthen our epidermis. For sufferers of Keratosis Pilaris however, the skin produces more protein than is needed. When combined with dead skin cells and other impurities, this excess keratin can build up in the hair follicle, trapping hairs. This forces the hair to grow inwards, and this is when red bumps make their appearance.

It’s not fully understood why people who suffer from Keratosis Pilaris produce an excess of keratin, although in more than half of people affected the condition is shown to be genetic. It’s also much more common in adolescence and can also be made worse in cold weather when skin is lacking in moisture.

How to manage Keratosis Pilaris

Although there is no known cure for KP, there are ways to manage the condition. The best way to control the symptoms is with a regular, effective skincare routine that keeps skin healthy and moisturised. 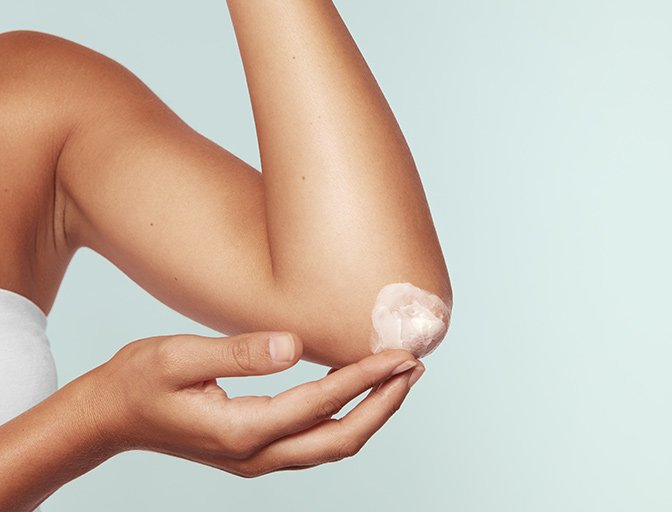 A gentle, pH balanced cleanser won’t disturb skin’s delicate balance or irritate. AMELIORATE Nourishing Body Wash is free from soap and packed with Omega oils to cleanse without causing dryness. Since maintaining moisture is key, stick to a quick, warm shower that won’t strip any natural oil or moisture from the skin.

Be kind to your skin and steer clear of abrasive scrubs that will only irritate. These kinds of exfoliants won’t get rid of the red bumps, so don’t make the problem worse by upsetting your skin. Choose an exfoliant that has a dual action and exfoliates on both a physical and chemical level.

If you’ve properly cleansed and exfoliated your skin, remember to follow up with a moisturiser to keep skin at its best. Skin needs moisture, so prevent dryness by using a moisturiser daily. Choose one that contains Alpha Hydroxy Acids to encourage cell turnover, as well as ingredients that both draw water to the skin and also stop natural moisture evaporating. AMELIORATE Transforming Body Lotion is clinically proven and dermatologically tested to smooth away bumps, soften and deeply hydrate.

As soon as you stop taking care of the condition, symptoms will unfortunately return so regular maintenance is essential.

The AMELIORATE Smooth Skin Hero’s Bundle is clinically proven and designed to provide a complete routine for the maintenance of KP. Each step enhances the next to leave skin soft, smoothed, and renewed.

The Return of the Bath!

What do alpha-hydroxy acids do?

How to Reduce the Appearance of Blocked Pores

Our Top Tips to Reduce the Appearance of Acne Scars