Writer and expert / Posted on

When your skin has made it through the turbulent water that is, acne, the least it deserves is to emerge the other end, clear, soft, and smooth. Unfortunately, life is not that easy. Instead, something called acne scarring exists. Acne scars are those pesky left-over marks once the blemishes themselves have cleared, and they just don’t seem to budge. Granted, they are frustratingly stubborn to treat, however, it is possible to reduce the appearance of acne scars. What’s more, with patience, a dedicated routine, and the right ingredients, you can reduce their appearance in the comfort of your own home.

Here’s Ameliorate’s guide on how to reduce the appearance of acne scars. 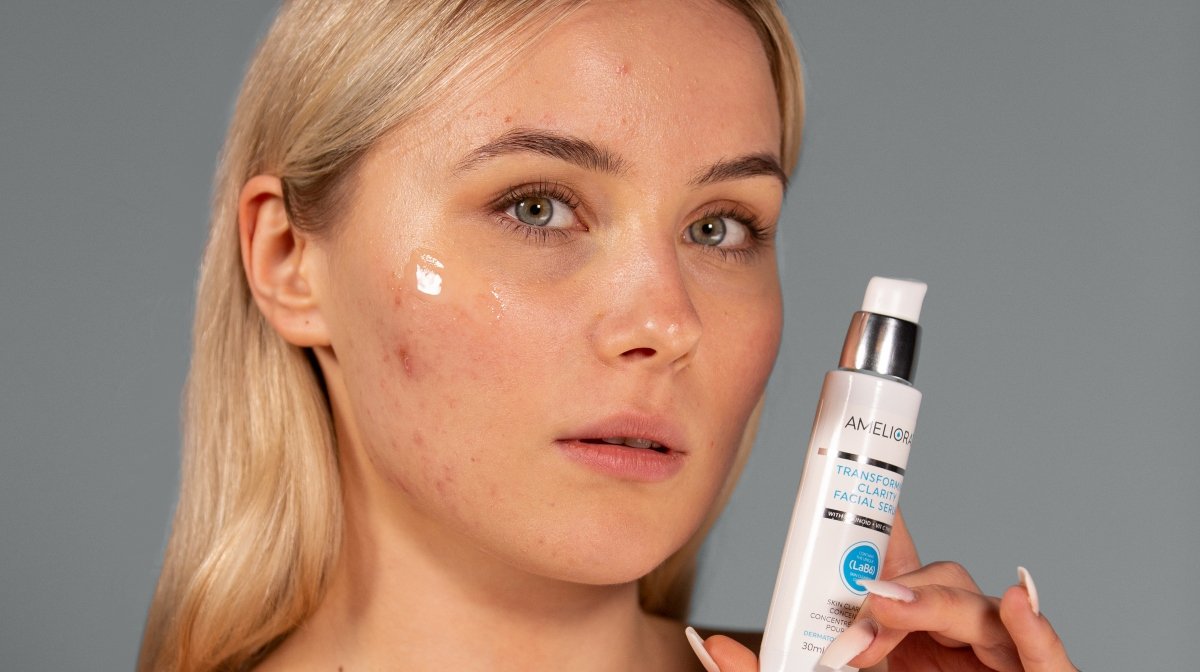 Why does acne leave scars?

First off, why oh why does acne leave scars in the first place?

Before we discuss this, it’s important we explain the difference between marks and scars. Acne marks are those dark brown or red spots that are left behind once the blemish has healed. They are the skin’s response to having a breakout and can last for days or weeks depending on how responsive your skin is. They are quite commonly experienced, and also commonly (and incorrectly) described as acne scars.

Acne scars are actual indentations in the skin and can be caused by severely inflamed acne, picking at blemishes, and the delayed treatment of acne. They affect the skin’s texture rather than simply its pigment. Why acne leaves scars is down to the skin’s healing process, and usually, two types of scars can result from this.

Why does acne leave scars that are pitted?

Firstly, we have pitted acne scars, which are often known as either:

Acne leaves scars that are pitted when your body tries to heal the damage by forming collagen. However, it doesn’t quite form enough, leading to these indentations in the skin.

Why does acne leave scars that are raised?

Raised acne scars are the opposite of pitted scars. They are the result of your body overcompensating in its production of collagen to heal the wound.

Do acne scars go away?

As mentioned, acne marks do resolve eventually. With the help of certain skincare ingredients that work to brighten and resurface the skin, this process can be accelerated. However, do acne scars go away entirely?

According to Cleveland Clinic, “some acne blemishes are small and the scars created are shallow and heal quickly.” However, the deeper the scars, the longer and more effort they require in order for their appearance to be reduced.

How to reduce the appearance of acne scars

Although this seems like quite a significant amount of new ingredients to add to your skincare regime, Ameliorate’s Transforming Clarity Facial Serum is made up of a concoction of all of these ingredients, with Vitamin C, Niacinamide, Willow bark extract (a gentler version of salicylic acid) and Retinoids.

Remember, Rome wasn’t built in a day. However the route to clearer, smoother skin involves dedication, cleansing, patience, and of course, the right ingredients. Discover our Blemish Range today.

Josie is an Online Beauty Editor with a Bachelor of Arts degree in Journalism. Her passions involve all things skincare and beauty and in her free time she likes to travel, read and get her beauty sleep.

How to Reduce the Appearance of Blocked Pores

The Return of the Bath!

The Best Skincare Routine for Men: Skincare Tips for Men

How to Replace Dull Skin with a Radiant Glow

How To Treat A Dry, Flaky Scalp: Causes And Prevention Tips